While normally, I don’t go into detail about these journeys, the words that Nauthiz spoke to me require a bit of context to understand. So please, let me tell you a story.

Crow, my guide through this world, led me to a village – the people were upset, some crying. A large fire had been built near the fields – which were rather empty. I asked an older man, the first person I came across, what had happened. “The crops did not thrive after the hail came, and many of the young ones are now sick. We’ve built the need-fire, so the gods can hear our pleas.”

I asked to be taken to one of the children and was led to a little boy, maybe 7 or 8 years old. I laid my hands upon his head and sung a song of power (that centered around Nauthiz) and when I had finished I knew he would be well. As I left the small house with the boy sleeping inside, the people of the village kept stopping me – to thank me or to ask me to help their children. I knew however that I needed to speak with the need-fire. 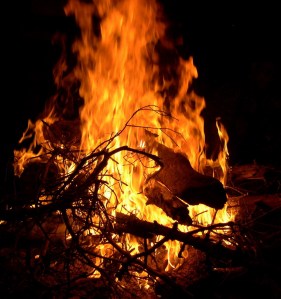 I approached the need-fire and asked if there was a rune spirit. It said:

I am Nauthiz, and here you have seen my power.
Though these people felt they had no power
They realized the on thing that can always do – seek help.
And you have seen the other aspect of me –
For it was through you that aid and hope have been given to these people.

I turned around and the village cheered me as I left for the aid I’d given.

And truly, I believe this aspect of Nauthiz – the giver of aid – is so often overlooked. It is a great gift of Nauthiz that we see the ties that bind and can call out to have them cut; sometimes we can accomplish this ourselves, but other times we need the help of others. Sometimes we are but instruments of healing and I am honored whenever I am chosen for this role.

We Lovely Dozen have a bit of a history with the county fair – a history of not totally awesome, to be more exact.

Last year, we were invited to perform only to discover the day of our set that we’d been moved to an uncovered stage – in the rain. We decided to take our show back to our dance home for anyone who wanted to join us. So when we found out Wednesday that we’d been invited to dance again (today, actually), we were understandably a bit on edge.

Not a photo from today, but me in the same outfit (more or less).

We were indoors this time around, in a space with an asphalt floor, no sound system, and (kinda terrible) echoes. Also, it was a building at the fair – lots of coming and going, shouting and crying (next to the face painting for the kids). Complaining about our dance space, however, is not the purpose of this post.

After our set, which ended with an audience participation song, we had a little girl (maybe 5) come up to us with her mother. We tried to get her to dance, but as little folks often are, she was too shy to move. The look in her eyes as we danced was the most beautiful thing I’ve seen in a long time. She then wanted a picture with the “pretty girls”!

Moments like this stick with me. I remember reading some time ago in some book by Scott Cunningham (perhaps Living Wicca?) the idea of seeing the Divine in the eyes of children as they explore the world, as they learn, as they grow. And it is beautiful.

Speaking of dancing and children – another song I’m very much loving at the moment:

This week has been full of nothing but wake-up calls. It figures that this would happen around Midsummer – the time when the earth is fully awake and totally alive.  Aside from these clear signs to pay attention, Spirit is also giving me a big push, energetically speaking, to move forward – onward and upward, shifting and changing – GO!

Speaking of Midsummer – we here in the Midwest were treated to a different version of the solstice then usual. Generally, it’s a hot sunny day; great for really feeling the fire of the sun, the power of the Sun God. Today, however, was rainy in the morning and stormy in the evening – a different sort of power, but power nonetheless. Washing away any stubborn bits of the past season (of the earth and your life, of course) and leaving a ready field for new growth.

P.S. This is my Midsummer jam this year.

I am thankful for:

This time last week I was informed that friend that I’ve gone to school with all my life was in a car accident on his way to work and was in ICU.

Saturday morning, I was informed that he was taken off of life support, as per his wishes, so that his organs could be donated.

Tomorrow, I will be going to his memorial service.

So, what does this have to do with Wunjo? I realized that this man, Alex, was Wunjo personified. To me, Wunjo is joy (of course) and freedom and love between people. Alex was always happy, always smiling, always and forever a joy to be around. He spent a good bit of his childhood with his grandfather, a truck driver, and has been at all lower 48 states. Right after high school he went right to work out in the western part of the state. Alex was also one of the most gentle, caring,  and loving people I’ve ever had the pleasure of meeting.  His mother simply says he had a heart of gold.

Saturday evening someone else got that heart. When I received that news, I cried. Knowing who Alex was, that is exactly the first thing he would have wanted to give.

That is truly the beauty of Wunjo – giving love, sharing freedom, and inspiring joy.

Requiescat in pace – and may our souls have the pleasure of crossing paths again and again.

My mother and I were heading out to the casino about an hour away. The ride there wasn’t terrible, just a little rainy – but that rain turned into freezing rain. We were coming up to a stop sign and we spun out – a full 360 and right into the ditch. Lucky for us, someone stopped about a minute later for us – and someone else after that.

This is where the car finally came to rest. Hard to see, but that snow is knee high.

I am so thankful my mother was driving! And so thankful we have so many spirits and guides looking after us! The ride back was pretty disgusting with blowing snow – we went 40 mph (instead of 60) most of the way back. The important thing is that we are okay, my car is okay, and we made it home just fine (if not a little sore).

This morning I attended a Dao ceremony, preformed by a temple from Chicago – they traveled all the way out here for us! The ritual was so beautiful and really the most amazing thing was the children present. The co-owners of the store (where the ceremony was held) brought their little ones to receive the Dao.

While I can’t really explain the ceremony in words, I would encourage you to look around your area to see what’s out there.

That was followed by a trip to the thrift store, where I found some neat shell necklaces. I’ve been getting more and more into the “tribal-fusion” style of belly dance, which often uses cowrie shells in costume. And now, I’m finalizing my orders for belly dance costume pieces – how exciting!

What do I talk about?